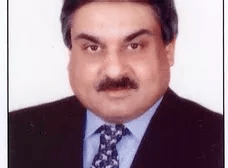 Ambassador Wadhwa served as the Indian Ambassador to Poland and Lithuania, to the Sultanate of Oman, to the Kingdom of Thailand and to the Republic of Italy and San Marino. During this tenure, Ambassador Wadhwa also served as the Permanent Representative of India to the Rome-based UN Agencies – FAO, IFAD and WFP. He was appointed President of the WFP Board on 22nd February, 2017.

Ambassador Wadhwa was Secretary (East) in the Ministry of External Affairs in New Delhi from 2014 – 2016 looking after South-East Asia, Australasia and Pacific, Gulf and West Asian regions, among other responsibilities. During this period he coordinated the evacuation of Indian nationals from Iraq, Libya, and Yemen.

From 1989-2000, Ambassador Wadhwa attended meetings of the First Committee in UNDC in New York first as a Delegate of India and later as Representative of the OPCW where he worked as the Head of the Media and Public Affairs Branch and subsequently the Government Relations and Political Affairs Branch. Ambassador Wadhwa represented the OPCW in inter-agency meetings with the IAEA in Vienna, with the OECD in Geneva and NATO and WEU and World Customs Organization in Brussels.

Ambassador Wadhwa has special interest and has specialized in commercial work through his career. He drew up the Most Favoured Nation (MFN) Agreement between India & China. This was the first ever agreement signed between the two countries since 1954. He headed the commercial wing of the Indian embassy in Beijing from 1983-87 and again from 1993 onwards. During his stints in Poland, Oman, Thailand and Italy, Ambassador Wadhwa was successful in attracting cutting edge technologies, investments and oversaw a substantial jump in trade between India and these countries by personally speaking at business related events.

He holds a Masters Degree in History with specialization in Chinese history and Medieval Indian history and architecture. He is fluent in English, Hindi and Chinese and knows French. Ambassador Wadhwa has contributed a number of articles, mainly in the field of disarmament and international security. He has also spoken at a number of international conferences.

Mission: Wants to use experience in the diplomatic service to facilitate and contribute ideas for the acquisition of high technology by India, formation of joint ventures and attracting foreign investments into India.