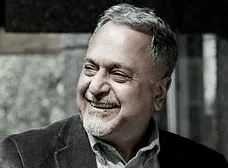 BHARAT KARNAD  is a Distinguished Fellow at the United Service Institution of India and Emeritus Professor for National Security Studies, Centre for Policy Research, New Delhi. His most recent book, Staggering Forward: Narendra Modi and India’s Global Ambition was published by Penguin in September 2018. Previous books include Why India is Not a Great Power (Yet) (Oxford University Press, October 2015), Strategic Sellout: India-US Nuclear Deal (2009), Índia’s Nuclear Policy (Praeger, 2008), Nuclear Weapons and Indian Security: The Realist Foundations of Strategy, now in its second edition (Macmillan, 2005, 2002), and Future Imperilled: India’s Security in the 1990s and Beyond (Viking-Penguin, 1994) .

Educated at the University of California (B.A., Santa Barbara; M.A., Los Angeles), he has been a Visiting Scholar at Princeton University, University of Pennsylvania, and the University of Illinois, Urbana-Champagne, and Foreign Fellow at the Shanghai Institutes of International Studies and the Henry L. Stimson Centre, Washington, DC. He lectures at the top military training and discussion forums, including CORE (Combined Operational Review and Evaluation), DRDO Annual Directors’ Conference, National Defence College, Higher Command Courses at the Army War College, College of Air Warfare, College of Naval Warfare, College of Defence Management, College of Military Engineering, and at Army Command and Corps level fora and equivalent in the other two Armed Services, and Defence Services Staff College, and  also at the Indian Administrative Service Academy, Foreign Service Institute, and the National Police Academy.

He was commissioned by the Headquarters, Integrated Defence Staff, Ministry of Defence, to conceptualize, conduct for several years, and lecture at the annual Strategic Nuclear Orientation Course for Brigadier-rank officers and equivalent from the three Armed Services, and conceived and conducted the first ever high-level inter-agency war game on the nuclear tripwire in the subcontinent (at the Army War College, 2003).

He is a TV commentator and writes the occasional newspaper op/ed column in Indian newspapers and a sometime contributor to various periodicals, including a column (‘Realpolitik’) in BloombergQuint.com, Seminar,  Open Magazine, India Today, The Week, and web news & views outlets — The Wire.in, Rediffnews.com,  thecitizen.in, The Eastern Link.

‘Security Wise’ was the title of a fortnightly newspaper  column I wrote for many years in the Asian Age and Deccan Chronicle and, later, in the New Indian Express. It is a blog dedicated unapologetically to espousing realpolitik foreign and military policies and realist approach as vehicle for furthering India’s national interest (stripped of abstract universal concerns, such as world peace, disarmament and nonproliferation, Third World good, etc., and of emphasis mainly on soft power, that have for too long been the bread and butter of Indian foreign policy, both in the declaratory sense and in substantive terms).

In a system of sovereign nation-states and a harsh “dog eat dog” international milieu, National Interest should be the only motivation and driver of all state policies in the external realm. Conjoined to the relentless and focused acquisition of strategic hard power capabilities, it will, as this analyst has argued since 1979, achieve for India Great Power it has always potentially been but which governments since 1947 have failed to realize. This is because of the absence of clearly articulated national vision, strategy, disruptive game-plan and policies, and of strong political will to implement them. It has resulted in a often skewed world-view, miscued geopolitics, a myopic approach fixating on “unfriendly neighbours”, an over-accommodating  stance vis a vis powerful states, an inclination to uphold the status quo rather than challenge and upend the prevailing Asian and global order that discriminates against and victimizes India, a manifestly wonky threat perception, an institutional disregard for achieving arms self-sufficiency and, hence, a military, dependent on imported armaments, with limited reach and clout backed by a truncated nuclear deterrent (that can boast of credible and reliable thermonuclear weapons only if India resumes open-ended underground nuclear testing).

This constitutes the meat of the argument I have made for three and half decades now (in 2016), within government and military circles and outside of them, and reflects my bedrock beliefs, which are reflected in all books, other writings and in the posts to-date in this blog. The arch-realist policy compass ‘Security Wise’ represents will not change, whichever the government of whatever ideological stripe is ruling in New Delhi at any given time.

Reproduced with permission of Shri Karnad from his website at https://bharatkarnad.com/about