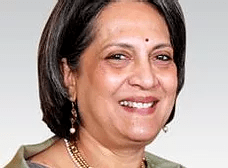 Ambassador Deepa Gopalan Wadhwa is one of India’s brightest and finest diplomats who joined the Indian Foreign Service (IFS) in 1979 and retired in December 2015.

She served as Ambassador of India to Japan (2012-2015), Qatar (2009-2012) and Sweden (2005-2009). She was concurrently accredited as Ambassador to Latvia (from Stockholm), and Republic of the Marshall Islands (from Tokyo). During her career, she has also held other significant assignments in Geneva, Hongkong, China, The Netherlands, the International Labour Organization (ILO) and the Ministry of External Affairs.

In the course of her career spanning over 36 years, she has handled a wide swathe of issues and subjects related to India’s relations with key countries such as Pakistan, China, and Japan; participated in international conferences and negotiations related to climate change, sustainable development, disarmament and human rights and was instrumental in the active promotion of India’s economic interests in areas of trade, technology, investments and energy security during postings in Europe, the GCC and Japan.