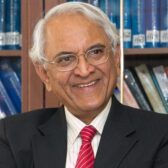 As one of India’s most brilliant diplomats, he was Joint Secretary in the Prime Minister’s Office (2000-4) dealing with Foreign Affairs, Nuclear Energy, Space, Defence and National Security; headed the Development Partnership Administration (2012-3); Secretary in the Ministry of External Affairs (2013-14) and was India’s Ambassador to Russia, Ireland and Czech Republic.

He holds a degree in Physics from St. Stephen’s College, Delhi and in Electronics & Communications Engineering from the Indian Institute of Science, Bangalore.