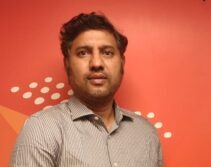 Parag is a technology serial entrepreneur with over 28 years of industry experience, out of which 19 years have been in indigenous high technology startups. At Saankhya he has been the CEO since April 2014. He co-founded Saankhya and was the CTO and VP Marketing between 2007-2014 contributing to the product roadmaps and designing the award winning Saankhya SDR architecture.

Saankhya is India’s first private fabless semiconductor companies. He is also a member of the Board of Directors.

Prior to Saankhya he co-founded Smart Yantra technologies in 2000 and Vayavya Labs India’s first Electronic Design Automation Company in 2006. Both companies are high technology product companies. Smart Yantra was acquired by Genesis Microchip in 2004.  Early on in his career he worked on the Mission Computer hardware and software for India’s indigenous LCA , Tejas and at Philips Innovation Labs as one of its early members building world’s early Digital TV and STB receivers.

Parag is considered one of the foremost experts in the world on Software Defined Radios (SDR) and Cognitive Radios as a technology for telecom, broadcasting, and is one of the inventors of the 5g broadcast broadband technology. He has designed and invented multiple Computer languages and Instruction Set Architectures. He is also credited with nurturing and building the hardware startup ecosystem in the Bengaluru region. Under his leadership Saankhya has designed and successfully launched indigenous SDR chipsets and communication products for a variety of applications.

He is a named inventor on 40+ international patents in the areas of VLSI design, CPU/SDR architecture, Digital Communications, Signal Processing and Hardware-Software Co-design/ Code generators. Most recently he was chosen by Economic times  as one of the   “50 promising entrepreneurs in India-2020 “.

He holds a Bachelor’s degree in Computer Science and Engineering (1992) from Karnatak University, India.