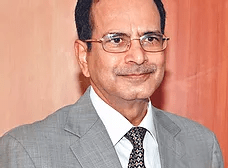 Dr. R.K. Tyagi took over as the 36th President of the Aeronautical Society of India (AeSI) in September 2017.  The prime objective of AeSI is to promote the advancement and dissemination of knowledge of Aeronautical and Aerospace besides science Aircraft engineering.

Dr. R.K. Tyagi is considered a technology leader and turnaround specialist. He is an Electronics and Telecom Engineer as well as distinguished alumni of IIT Roorkee. He subsequently received an MBA and Doctor of Philosophy (Ph. d).

Under his Chairmanship, HAL (Hindustan Aeronautics Limited) produced the first Light Combat Aircraft (LCA) (SP-1). Indigenous capability of Su-30 maintenance was developed. As a Technology enabler, he led the HAL paradigm shift by R&D planning of HTT-40 (Basic trainer aircraft), filing more than 1100 patents/IPRs and setting up of HAL chairs for R&D management in IITs of Roorkee, Mumbai, Kanpur and Kharagpur.

Dr. R.K. Tyagi has rich experience in the petroleum field by way of contribution in oil field management, satellite communication and information, marketing management and SACFA (standing advisory council for frequency management) of Ministry of Communications. Dr. Tyagi is credited with evolving Indian offshore safety regulations and aviation standards for helicopters operations. Under his leadership as CMD, Pawan Hans started the first SEAPLANE operations in Andaman and planned first Indian HELIPORT at New Delhi. By introducing new Heliflights on seat sharing basis, he changed the paradigm of low cost helicopters flying in India similar to what Capt. Gopinath did for the ticketing costs for aircraft travels in India.

Dr. R.K. Tyagi is currently independent director on board of Air India, mentor director for DIIA (Defence Innovators and Industry Association), Member – S&T management council of DRDO, Trustee – Foundation for aviation and sustainable tourism (FAST). He is also an active policy enabler and strategy advisor to Aerospace and defence industry, thru various forums like IDSA, CENJOWS, USI and RWSI.

Dr Tyagi has won many awards and accolades for his contribution to developing Indi’s aerospace capabilities. Among his many publications is one dealing with the need to develop the regional transport aircraft: