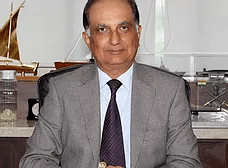 Achievements at Mazagon Dock Shipbuilders Limited: The company saw exceptional and unprecedented growth and a complete turn-around during the tenure as follows:-