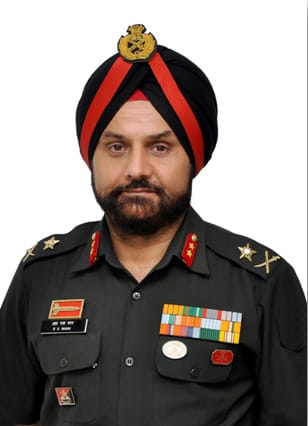 Major General Rambir Singh Mann, Vishisth Seva Medal, is a second generation officer and an alumnus of the Lawrence School Sanawar, batch of 79, and the National Defence Academy, Khadakwasla.  He was commissioned into the Mechanised Infantry in December 1982, from the Indian Military Academy, Dehradun.

The General officer has operational experience across the spectrum of conflict and terrain profiles.  In a military career spanning nearly four decades, he has tenanted operational and administrative staff and command appointments including in Counter Insurgency/Terrorist operations in Kashmir and Assam/ Nagaland as well as in disaster relief operations.  He also has served with the United Nation Peace Keeping Force in Angola in 1998-99, coordinating operations of UN agencies and NGOs. Important assignments included command of a Mechanised Infantry Battalion during Operation Parakram, an Armoured Brigade in Rajasthan and an Infantry Division in Secunderabad. Having operated extensively in an equipment intensive environment in exercises as well as operations, the General Officer has unique insight into military technology and equipment needs.  Whilst part of Perspective Planning & Force Development Branch, HQ Integrated Defence Staff, he participated extensively in various defence procurement and indigenous production committees including Services Capital Acquisition Committees. As the ‘Make’ procedure was initiated during this period the responsibility for which was his, he conducted many Feasibility Studies for Services projects and workshops for industry alongwith CII & FICCI, and personally steered ‘Make’ projects like the Tactical Communication System, Futuristic Infantry Combat Vehicles etc. Subsequently, the General Officer was Incharge of the successful Field Trails for the Third Generation SPIKE Anti-Tank Guided Missile system, which is presently under procurement. While serving as Military Assistant to VCOAS in 2015-16, a number of procurement initiatives were monitored and implemented, both under Vice Chief’s powers as well as through the SCAP committees.

The General is a graduate of Defence Services Staff College Wellington, Senior Command Course at Army War College MHOW, Naval Higher Command Course at Naval War College Mumbai, Senior Defence Management Course at College of Defence Management, Secunderabad and Advance Course on International Strategy at the Institute of Advanced Studies in National Defence, Paris (IHEDN, Paris) in April 06. He is a recipient of the Vishisht Seva Medal from the President of the Republic, the Chief of Army Staff as well as the Chief of Integrated Staff and General Officer Commanding Northern Command Commendation Cards for distinguished service to the Nation in different assignments.

In his last assignment prior to superannuation as Additional Director General National Cadet Corps with 1,40,000 cadets in the states/provinces of Punjab, Haryana, Himachal Pradesh and Chandigarh, a special drive to empower the youth as well as state specific social initiatives are noteworthy contributions. Thus, in Punjab, the focus was on prevention of drug abuse, in Haryana it was empowerment of the girl child, in Himachal Pradesh it was environment protection and in the Union Territory of Chandigarh it was emancipation of slum dwellers. Engaging with the provincial governments to enhance their investments in the youth and in the NCC also needs mention. In a noteworthy outcome, the Punjab Government made NCC compulsory for all eligible youth in the border districts of Punjab, so as to empower the youth and also curb drug smuggling from across the border. Extremely found of reading and writing, some of his articles can be accessed on his Linkedin link given below.