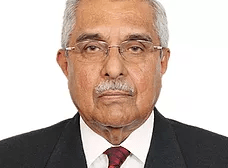 Lt General Satish Nambiar is a recipient of the Vir Chakra for bravery in battle, and the Ati Vishist Seva Medal and Param Vishist Seva Medal for distinguished service. He was conferred the Padma Bhushan by the President of India on Republic Day 2009. As Director General of Military Operations (1991), he led two defence delegations for discussions with Pakistan. He was appointed the first Force Commander and Head of the United Nations forces in the former Yugoslavia he set up and ran the mission from 3rd March 1992 to 2nd March 1993.

Declining an offer of extension, he returned to the rolls of the Indian Army and retired as the Deputy Chief of the Army Staff on 31st August 1994.

He is on the International Advisory Council of the Folke Bernadotte Academy, Sandoverken, Sweden and now a senior adviser to the Challenges Forum an initiative coordinated by the FBA. He is an inaugural member of the International Advisory Board of the ‘Security Council Report’ and on the Advisory Board of the Geneva based ICT for Peace Foundation. He was Adviser to the Government of Sri Lanka on certain aspects of the peace process in 2002/03. He served from 2nd November 2003 to 30th November 2004 as a member of a High Level Panel appointed by the Secretary General of the United Nations to review the status of international collective security mechanisms and make recommendations for reform. He was a member of an Expert Legal Inquiry set up by the International Commission of Jurists (ICJ) to ascertain whether there had been violations of International Humanitarian Law during the actions in Lebanon in July/August 2006.  Appointed as a member of the Advisory Board to the United Nations Institute for Training and Research (UNITAR) Peacekeeping Training Programme (PTP) from 01 September 2009 to 30 September 2012.

Commissioned into the Maratha Light Infantry in December 1957, the General Officer commanded two battalions of the Regiment, a mechanised brigade group and a Mechanised Division. Served in operational assignments including counter-insurgency operations and in the 1965 and 1971 wars on the sub-continent. A graduate of the Australian Staff College (1968), he was with a training team in Iraq (1977-79), was on the faculty of the Defence Services Staff College (1980-81), and served as Military Adviser at the High Commission of India in London (1984-87).