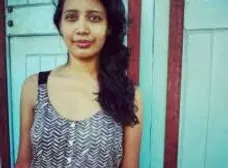 Shoili Kanungo is an eminent graphic artist and draws, writes, and makes comics. She is an abstract painter and blends innovative styles for her creations.  Her work has been published in the Indian Quarterly (IQ) magazine, The New Enquiry, VICE, and Papercuts. She designed the SITARA Logo at the request of SITARA, and the logo for the Defence Industry & Innovators Association (DIIA), also at our request.

‘Black Panther and Little Fish’ is a comic that was written and illustrated by Shoili Kanungo and first published in the print version of the Indian Quarterly (April 2015).

‘Suppressed Images’ is a comic that documents a collaboration between Chelsea Manning and Heather Dewey-Hagborg on the artwork Radical Love. The story was illustrated by Shoili Kanungo. The work has also featured in VICE magazine, the Creator’s Project (thecreatorsproject.vice.com/blog/chelsea-manning-suppressed-images-graphic-novel) and has been exhibited in Fridman Gallery in New York.

‘Miss Moth’ is a short story that was written by Shoili Kanungo and was first published in the print version of Papercuts (2014 ‘Metropolis’ issue), a South Asian literary journal.