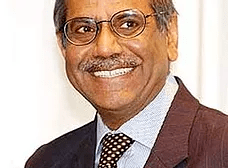 Ambassador Shyam Saran served as one of India’s finest and most distinguished Foreign Secretaries between 2004-2006. He has served the Nation with great merit and received many Awards for distinguished service, including the Spring Order Gold and Silver Star by the Emperor of Japan.

Since joining the Indian Foreign Service in 1970, he has served in several capitals of the world including Beijing, Tokyo and Geneva.  He has been India’s Ambassador to Myanmar, Indonesia and Nepal and High Commissioner to Mauritius.

After a career spanning 34 years in the Indian Foreign Service, Saran was appointed India’s Foreign Secretary in 2004 and held that position till his retirement from service in September 2006.

Subsequent to his retirement, he was appointed Prime Minister’s Special Envoy for Indo-US civil nuclear issues and later as Special Envoy and Chief Negotiator on Climate Change.  He has now concluded his assignment in Government and returned to being a private citizen.

During his last two assignments, Shyam Saran served as Prime Minister’s personal representative or “Sherpa” at the Gleneagles and St. Petersburg G8+G5 summits and was present at the Toyako and and L’Aquila Summits as an advisor on Climate Change issues. He also attended the Pittsburg G-20 summit as a member of the Indian delegation.

Shyam Saran was Chairman of the National Security Advisory Board under the National Security Council from 2013 to 2015. He served as Chairman, Research and Information System for Developing Countries, which is an autonomous think tank specializing in studies on economic and trade related issues from January 2010 to January 2017. During the past few years he served as Independent Director in the boards of Wipro, Indian Oil, ONGC Videsh and the Press Trust of India. He is also Senior Fellow with the Centre for Policy Research, a prestigious think tank which covers a wide range of political, social and economic issues, including foreign policy related issues. He is now Member of its Governing Board. He is concurrently a Member of the Governing Board of The Institute for Chinese Studies. Shyam Saran is  a Life Trustee of the India International Centre. He speaks and writes regularly on a variety of  subjects. His book, “How India Sees the World” was published in 2017.

On January 26, 2011, Amb. Shyam Saran was awarded the Padma Bhushan by the President of India for his contribution to Civil Service. The Padma Bhushan is the third highest national award in the country.

In May 2019, he was conferred the Spring Order Gold and Silver Star by the Emperor of Japan for promoting India-Japan relations.

Saran holds a post-Graduate degree in Economics.  He speaks Hindi, English and Chinese and is conversant in French.

He is married and has one son and a daughter.