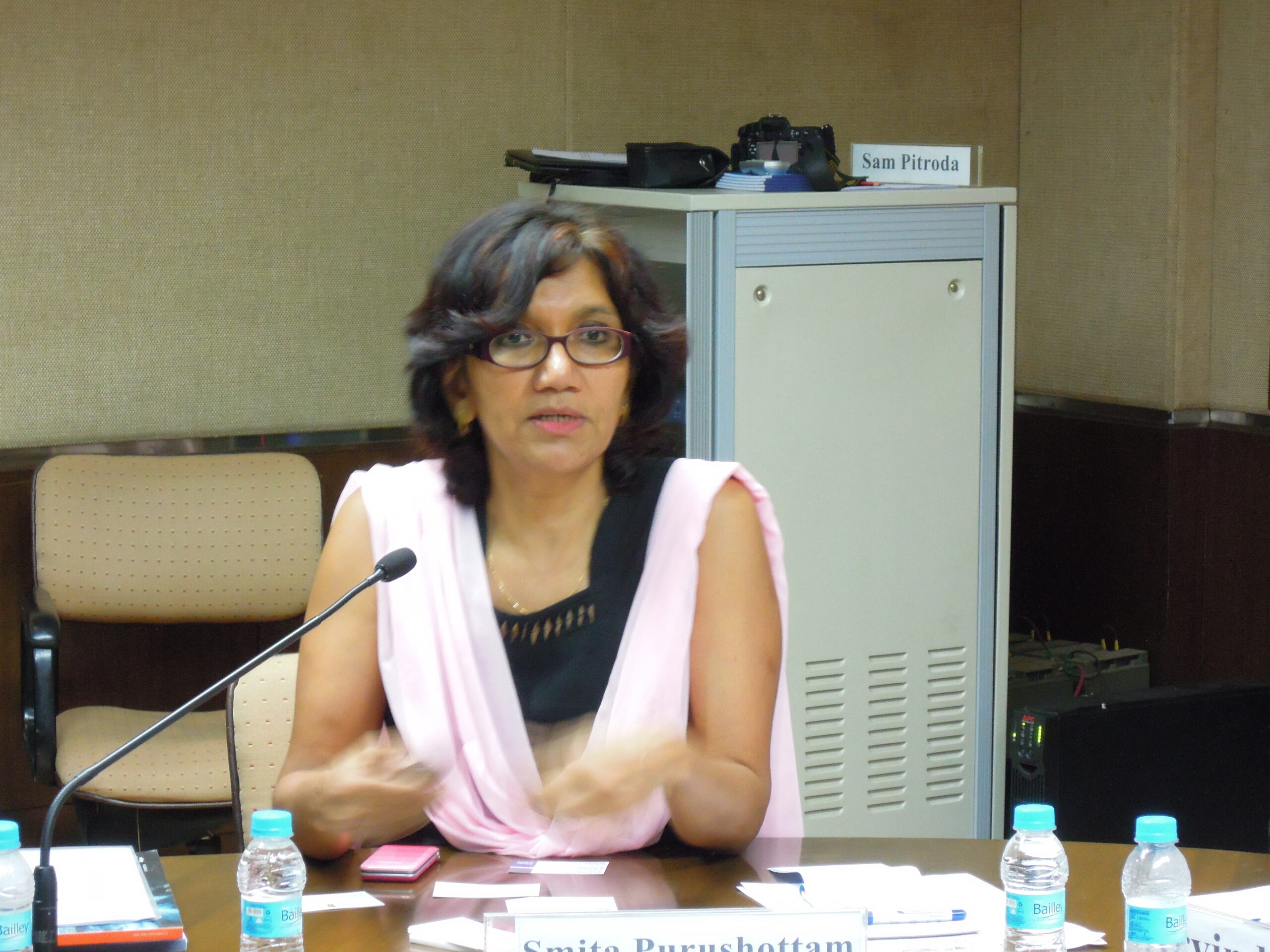 Smita Purushottam is the founder of the non-profit Do Tank “SITARA”, a Science, Indigenous Technology and Advanced Research Accelerator, to bring increased vigour to the indigenisation of high-tech production and building a Science Nation in India. She had launched the High-Tech Defence Innovation Forum in 2011 but it was taken over after she left. Her inspiration is her late Father, Shri S.V. Purushottam, an idealist, brilliant and beloved by all Indian Foreign Service Officer, who passionately espoused his country’s cause and left behind an unfulfilled desire to make India a prosperous and advanced country. It was due to his urging that she took the test for the All-India services. Her Grandfather Shri Sidheswari Prasad Sinha, a genuine Freedom Fighter who gave up politics because of corruption and the loss of direction, also served as an inspiration in her early years. He was dedicated to building a prosperous, advanced India based on the principles of a largely free market tempered with enormous compassion, an India free from superstition and feudalism .

She served as Ambassador to Venezuela (Jan 2012 – Jun 2015), Switzerland, Liechtenstein and the Holy See (Aug 2015-Oct 2017). In Switzerland, she transformed the sleepy bilateral relationship with 3 Summits held in rapid succession due to realisation of the benefits of a stronger partnership with the world’s No. 1 country in Innovation, international competitiveness, vocational education and environmental performance. Concrete progress was achieved on black money and Swiss support for India’s NSG candidature. Several investment commitments from high-tech Swiss firms were received during her tenure.

She also served in India’s missions abroad as Deputy Chief of Mission in the Embassy of India in Berlin, Minister (Political) at the High Commission of India, London, Counsellor for Economic and Commercial Affairs at the Indian Embassy in Beijing the Embassy in Brussels, and Language-trainee and Information Second Secretary at the Embassy of India, Moscow. She made unique contributions in her assignments. Her most formative experience was in China, as she had the opportunity to study Chinese economic reforms first-hand, which she relayed back to India. She was struck by the pace of progress and the enthusiasm for reform at all levels. She spent a year as Fellow at Harvard during 2000-2001 where she prepared a paper “Can India Overtake China?” (2001), in which she compared the two economies and their respective reform experiences; analysed the ongoing reforms in the Indian economy focusing on the telecom sector, aviation, privatization attempts and IT, and recommended building a strong manufacturing sector like China had. She emphasised the importance of embedded technology, now called the IoT, and predicted the success of the ongoing telecom sector reforms in India. Since then, her focus switched to China’s Science & Technology Advances and her publications focused on innovation ecosystems, including the highly sophisticated American ecosystem.

She served also as Joint Secretary at the Foreign Service Institute (MEA), New Delhi; Joint Secretary in the Integrated Defence Staff Headquarters in MOD; Director/Under Secretary (East Europe/Russia/Soviet Union) and SAARC, and Under Secretary (Bhutan) in MEA. She was perhaps one of the few people who predicted that Glasnost and Perestroika would lead to the unwinding of Communist Party rule in the USSR, which was ignored. She predicted the disruptive effects of China’s tech acquisitions spree and ODI for Europe’s technological base and even EU unity, all of which have come true (the article was rejected as too speculative at the time), and that China’s S & T advances contained a powerful challenge for India.

She also attended courses at the National Defence University, Washington in July-August 2002, and the Workshop on the Relationship Between National Security and Technology in China at the University of California, San Diego, in July-August 2013. She attended the High-Performance Leadership course at IMD, Lausanne in May 2017. She joined the Institute for Defence Studies & Analyses (IDSA), New Delhi in 2010, as Senior Fellow where she launched the High-tech Defence Innovation Forum to promote high-tech indigenous science and industry, and also the Eurasia cluster to revive studies on this region. She attended a few business management classes at VUB, Brussels.  She was admitted with a full Fellowship for a PhD program at an Ivy league University – Cornell – in 1980 but could not join as she qualified for the Indian Foreign Service in the same year, after briefly teaching History at Delhi University. She was member of the Board of Studies and Adjunct Professor (without remuneration) at the Bharatiya Skills Development University, Jaipur, an organisation which she extended full support to during her stay in Switzerland. BSDU is adapting the world-renowned Swiss vocational education system to Indian conditions.

Ms. Purushottam has been published in newspapers and journals in India and abroad.